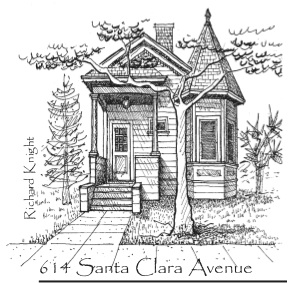 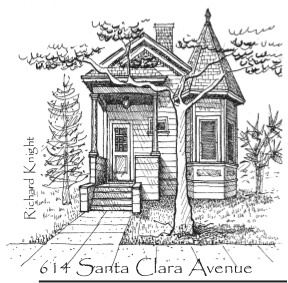 The oldest structure in the award winners this year is the 1872 Victorian cottage at 614 Santa Clara Avenue, a tiny house that was enlarged and renovated with the assistance of the Alameda Department of Community Development (ADCD). Owner Alison Urdan described the project, “The entire house was redone, from the foundation through the roof. None of the this would have happened without Robert Haun who is a Reconstruction Specialist with the ADCD Housing Rehabilitation Program.” Alison qualified for a low interest loan to remodel the home she has owned for nineteen years, because the income was low and she and her three children were overcrowded in the one-bedroom home. “Bob Haun helped me figure out how to enlarge the house while keeping the Victorian façade. He also stood by me during the reconstruction, which was very stressful.”

“Nothing was changed on the front of the house, because of its historic nature, although we did paint it. Many things had to be brought up to code. The original brick foundation had to be replaced, and there was lead in the paint. I was going to have new linoleum put down in the kitchen, but after the contractor peeled away layers of old floor covering, we found this wide board wooden floor, so I refinished that. We couldn’t get rid of some staining near the sink, but I figured it was part of the history of the house, so we left it there. Also in the kitchen we cleaned and replaced two original brackets. “On the back we added a bathroom and tow bedrooms for the kids. I worked with architect Scott Donahue on the design, trying to preserve as much of the old house as possible. He really appreciated using original parts instead of tossing them.”

Alison did some of the work herself, including adding a deck on the back. “When the deck was done, Bob came by and left his card. On it he wrote, “The stairs are upside down.” Well, I had been wondering why they were so narrow and steep that you had to walk down sideways. So I took the wooden sections all apart and smashed up the concrete and redid the whole thing. After that, of course, I feel like I can do anything!”

Alison has some suggestions for other homeowners, “I wanted to use the bricks form the original foundation to build a patio, but the contractor sold them. Three original light fixtures disappeared. The house had three fancy ventilator plates, and two of those went fugitive.” So she recommends that before any work starts, you document what you want to keep with photographs, get a signed agreement with your contractor that specifies what to preserve and, if possible, take the items away yourself and sequester them somewhere safe.

“I was curious about the history of my house so I went to the Alameda Museum. There I got the name of Rudolph and Anne Pohlman, the original owners, and the date of 1872, but no other information except that it was ‘an early cottage with architectural alterations in the Queen Anne style.”

Local writer and historian Woody Minor evaluated the house as “eligible for the National Register. Its architectural significance derives from two considerations. First, the house is a rare remnant of an early cottage. The Alameda Museum listings document only thirty pre-1875 houses still standing in Alameda. Second, the 1900s façade alterations are themselves important for their embodiment of changing tastes in house styles. As it stands, the house encapsulates the evolution of local residential styles form the early years of settlement to the turn of the century. The modest scale of the house does not detract from its architectural significance.”