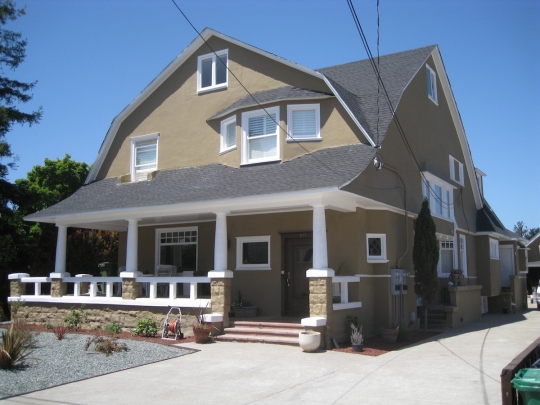 Saved at The Brink: 855 Cedar Street

The story of 855 Cedar began back in the late 1890s, when the house was designed by a woman, Mrs. Thomas H. Speddy, who also supervised the construction. Woman architects were very unusual at that time and Mrs. Speddy’s work was the subject of a full page March 17, 1901 San Francisco Chronicle article. So it seems fitting that today the house is again owned and controlled by a woman, Meilin Liu.

According to the very interesting and informative website, www.855cedar.info, established and maintained by a former owner’s relative, the house was developed by Mr. and Mrs. Thomas H. Speddy as their residence and completed on August 1, 1899. The builder was Charles Bolin. The house was converted to a triplex in 1949 accompanied by additions. At some point, the original shiplap siding, with cedar shingles on the upper walls, was covered with stucco.

Meilin took possession of the house on December 28, 2010, following a court- supervised receivership auction, and to say it had fallen out of grace would be an understatement. The house had become a blight to the neighborhood. Meilin and Larry heard stories of the roof leaking for 40 years. The prior occupants had rigged up a contraption on the 2nd floor to catch water for toilets and bathing since the water main was broken. Two 50 gallon containers were arranged so the over flow would run through the floor to the 1st floor and to the outside. The foundation was caving in; the electrical was unsafe; and the plumbing system was inoperative. The first floor bathrooms did not even have a floor. There were illegal fireplaces spliced into the existing chimneys in almost every room to provide heat, which, of course, resulted in a fire in 2007. There was not much left to save. If not for the historical value, the best solution would have been to raze the structure. 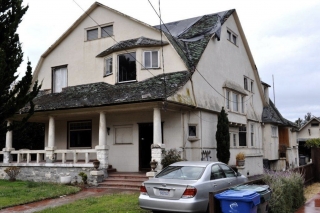 Alameda’s historic preservation community was concerned that the structure would be burned down by squatters or rendered unrepairable by architectural thieves and ongoing exposure to the elements. However, Meilin and her contractor, Larry Kudla, completed the project and have moved into one of the three units.

The structure had been vacated in 2007 after the fire left a hole in the roof. Following inspection, the City’s Code Compliance Unit issued in November 2007 a list of code violations that declared the structure a “Dangerous Building” and included, among other things: a portion of foundation removed in the basement; dry rot and deterioration in the roof; exterior stairs and a roof overhang in danger of collapse; and kitchens, fireplaces and a sauna (!) added without permits.

Following repeated unsuccessful efforts to have the previous owner correct these conditions, the Superior Court in January 2008, at the City’s request, appointed J. Benjamin McGrew as Receiver for the property. Under State law, a Receiver can take possession of a property, correct code violations, bill the owner for all costs and, if not repaid, lien and sell the property. Mr. McGrew is a licensed California Real Estate Salesperson and President of Managewest, Inc., a full service real estate management company. He has acted as a court-appointed Receiver since 1982 and handled over 450 cases.

After over 40 court hearings where the former owner was given repeated opportunities to correct the violations or sell the property, the Court finally ordered the property to be sold at the 2010 auction, subject to the buyer correcting the code violations under the Receiver’s oversight.

During the rehab Meilin and Larry heard from so many—contractors, power company workers, Alameda waste workers—that had either lived in the house or knew someone who did. The house holds many memories for many Alamedans. There were daily visits from neighbors with words of encouragement and stories of their own projects. It seemed like everyday Meilin and Larry were giving tours of the home.

The most difficult part of replacing the roof was removing the four layers of tarps; the roof itself could be removed with a broom. Once the house was water tight, the foundation was replaced. In doing so, the rear corner of the building fell off into a pile of debris, since the walls were so decayed they could no longer support themselves let alone the structure above.

since in many areas the space for insulation was limited; this provided the highest insulation value and sound control. The original gravity furnace was nonoperational and was replaced with new high-efficiency furnaces for each of the three units. In addition, the interior received a total face lift, with three new kitchens and five new bathrooms. As a finishing touch, the house was given a bright, shiny new paint job.

The original first floor wood windows were retained, except on the south side where they were replaced in-kind due to deterioration. Glazing in the original sash was replaced by insulated glass (two sheets of glass bonded together) for noise attenuation and energy conservation. Eight second story aluminum windows were replaced with salvaged wood windows from Urban Ore in Berkeley and St. Vincent de Paul in Oakland. The top floor window openings needed to be enlarged on the north, south and east elevations for emergency egress. Here, the architecturally incompatible louvered windows were replaced with wood casements.

Meilin says “The job required a contractor with knowledge of multiple disciplines and a passion in preserving the historical aspects. Larry Kudla, my contractor, guided me through this adventure, and labor of love.”

The Alameda Architectural Preservation Society is very grateful to Meilin and Larry for taking on this project and saving a distinctive historic building that was on the brink of total loss. AAPS would also like to acknowledge the City of Alameda for working very hard and creatively to save the property and going the extra mile by pioneering the use of receivership in Alameda.

Finally, AAPS would like to thank J. Benjamin McGrew for his diligent and suc- cessful efforts to find a buyer who would sensitively rehabilitate the property. The successful conclusion of this precedent-setting receivership case sets the stage for further use of receivership to rehabilitate other extremely deteriorated Alameda properties where conventional code compliance tools are insufficient.

Meilin reports that when the City’s Building Official, Gregory McFann, asked Larry if he was ready for the next project, their initial reaction after one year of twelve- hour days everyday was “No way”! However, after receiving encouragement from the AAPS award, Meilin says that she will consider doing it again if the opportunity presents itself.