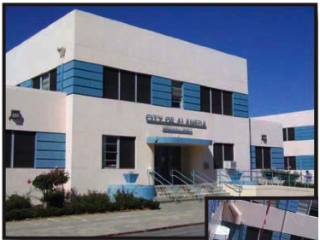 In 1938, the U S Navy began construction of a Navy Base which would eventually cover some 1575 acres in the West End of Alameda. With the fall of the Soviet Bloc, it became apparent to the U.S. Government that a commensurate downsizing of the U.S. Military Establishment could safely take place. In 1993, NAS Alameda was listed as one of those bases which would be disestablished. In 1997, the Navy formally ceased operations at NAS Alameda, and the transition to civilian uses, managed by the City of Alameda, really began moving in earnest.

Constructed in 1940, NAS Alameda’s Base Administration Building (Bldg 1), is one of the most significant contributors to the singularly uniform architectural character of the Base. Designed in a simplified Streamline Moderne Style, the Admin Building is constructed of poured-in-place concrete. Curving elements and horizontal recessed bands accentuated by contrasting paint colors between the windows on its two floors streamline the design. The windows, originally wood, but over the years replaced by the Navy with aluminum were designed to highlight the horizontality of the facades. The Admin Bldg was laid out in the shape of the letter “E”, allowing natural light and cross ventilation to enter every interior room. 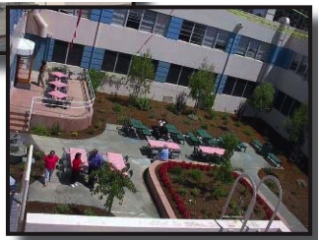 The Base Administration Building was the headquarters building for the Naval Base Commander and his Base Operations Staff, as well as for the Commander and Staff of Fleet Air Alameda, a separate operations command. COMFAIRALAMEDA, to use a Navy acronym, was responsible for the operations of NAS Alameda, NAS Fallon, Nevada, Naval Auxiliary Field Crows Landing (near Stockton), the Naval Air Rework Facility (NARF), as well as Aviation Electronic Warfare Equipment and Training. In addition, Aircraft Squadrons located at NAS Alameda were assigned by COMFAIRALAMEDA to various Air Wings operating from aircraft carriers, as well as from land bases throughout the world. COMFAIRALAMEDA coordinated the operation of nearly half a dozen aircraft carriers and support ships homeported at the Navy Base, and also coordinated their repairs and upgrades with Hunters Point Shipyard. While the Base Commander was a Captain in rank, COMFAIRALAMEDA was an Admiral in rank—in later years commanded by the slightly lesser rank of Commodore.

In order to formally establish a permanent presence on the former base, now named Alameda Point, the City of Alameda remodeled the Base Admin Building, and named it City Hall West. Currently some 102 City employees in various departments, the largest of which are the Public Works and Development Services, departments work out of this building. In order to bring the building into compliance with current building codes and accessibility ordinances, the addition of a public elevator, remodeled public toilets, accessible ramps, and the like had to be incorporated into the existing structure. A new roof was installed, and a new landscaped patio was constructed from a parking lot.

The City of Alameda has sensitively remodeled the former Base Administration Building for enhanced Community benefit and use. In creating City Hall West, the City of Alameda has clearly demonstrated that adaptive reuse of a historic structure is both practical and possible, while maintaining its historic character. City Hall West is a positive example for others to follow in adapting historic structures to new uses, both at Alameda Point and other locations throughout our Community.