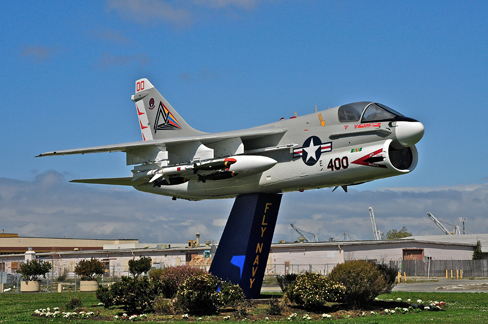 The reason for facing the Alameda Naval Air Station’s Main Gate towards the Oakland Estuary has been a mystery to many. The East Gate is the most logical and direct connection to Alameda’s existing street grid. Who would have oriented an entire Naval Air Station in the wrong direction? The march of time, and concomitant changes in transportation infrastructure colluded to create the mystery.

On June 1, 1936, the City of Alameda deeded the land for the construction of a new Naval Air Station to the Federal Government for the sum of $1.00. Appropriations for actual construction took two more years to wend their way through Congress.

In 1938, Congress appropriated $10 Million to build the new facility. Two more years were required for the actual construction. The Alameda Naval Air Station was commissioned on November 1, 1940, at about a 90% level of completion.

Between 1936 and 1940, a major transportation change had occurred in the San Francisco Bay Area. The San Francisco-Oakland Bay Bridge, completed in 1936, was opened to traffic. With the opening of this bridge, prevailing Bay Area traffic patterns were drastically altered. The Alameda Mole, which consisted of rail connections to a ferry terminal and pier providing a direct route to San Francisco, experienced a large falloff of passenger traffic. This falloff was so large that Southern Pacific curtailed operations to the Alameda Mole, on January 15, 1939, more than a year and a half before NAS Alameda was even slated to open. This facility had been planned on the premise that ferry and rail would be the major modes of transportation. The opening of the Oakland Bay Bridge had just obviated all of that.

The East Gate was the official secondary access to NAS Alameda, during its 57-years of operation. However, those who knew the Air Station’s features went in and out of the East Gate. It provided a short cut through an industrial area which included the diversion around a group of five very large above-ground aviation fuel storage tanks. In the early 1980s, these tanks were taken out of service, and removed. To dress up this now rather large unused open area, a landscaping plan which included a display aircraft on a concrete pylon was executed.

The Alameda Naval Aviation Depot (NADEP) selected for display, an A-7B Corsair II aircraft which had previously been assigned to the VA-304 “Firebirds,” a Reserve Attack Squadron stationed at NAS Alameda. This jet had experienced a structural failure in its fuselage, the result of a hard landing. “Stricken” from flight status, the A-7 had been deemed too expensive to repair. The aircraft display, completed in 1987, was unique in that the A-7 was fitted with (inert) ordnance, giving it the typical appearance of a Navy attack jet fully loaded for combat. It was an impressive sight!

After 23-years out in the open, it was apparent that the A-7 Display at the East Gate had deteriorated to a significant extent. In 2010, the volunteer group then restoring the A-4 jet located at the Main Gate, was asked by the City of Alameda to also take on the job of restoring the A-7. It was agreed that the City would pay for required parts and a new paint job; the volunteers would continue to make due with little, if any, remuneration. The A-7 Project turned out to be significantly more difficult and more extensive than the twice-fixed A-4 had ever been. Bird nests were found throughout the fuselage and even in the wings. Massive amounts of corrosion had to be repaired, and unsalvageable parts replaced. On March 22, 2013, after 2-1/2 years of effort, the jet was remounted on its concrete pylon.

With the motto “Fly Navy” in bright yellow on the leading edge of its dark blue pylon, the A-7, fresh in the colors it originally wore when flying in 1979, again welcomes one and all to Alameda Point.