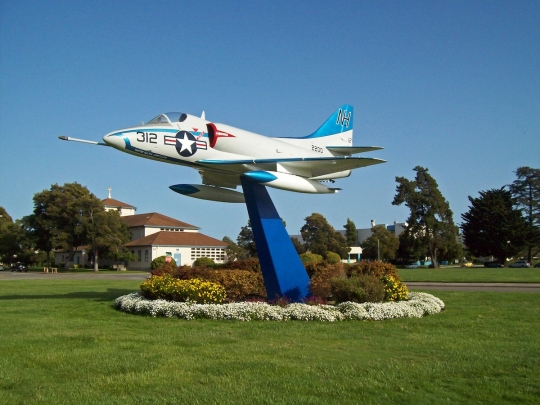 On April 30, 1957, the U.S. Navy accepted a brand new A4D-1 Carrier- borne attack jet from the Douglas Aircraft Company, Inc., El Segundo, CA. The jet was flown south to NAS Miramar, just north of San Diego to join the VA-113 “Stingers”, a squadron assigned to the carrier USS SHANGRI LA. This squadron also had an unsanctioned Navy Flight Demonstration Team named, “The Albino Angels”, a direct dig at the Official Navy Flight Demonstra- tion Team, the “Blue Angels”. Our new A-4 was painted up in the Albino Angels color scheme, which was rather short-lived, as Navy Officialdom came down on VA-113 with both bureaucratic feet, and demanded that the Albino Angels be disestablished at once!

For twelve years, our A-4 dutifully served in the Navy in various capacities, until 1969, when it was set aside for display purposes. A concrete pylon was built at NAS Alameda’s Main Gate, and mounted on the pylon, it welcomed one and all until it flew off the pylon, abetted by a particularly violent storm on the night of February 24, 2008.

The City of Alameda picked up the damaged plane, and put it into the dark recesses of the cavernous Bldg 005, former home of the Naval Air Rework Facility. While the Navy still held title, the City was tasked with the A-4’s care. But the City had no money to fix it, so there it sat, out of sight, until someone could come up with a plan and some money. 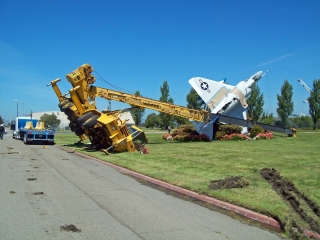 Along came Alameda resident Dick Rutter, a former Naval Flyer, who boldly stated that he and some of his old Navy friends could likely fix it over several months. If the City would pay for necessary pylon repairs and a new paint job, the volunteers could likely do all the rest for free. This scheme was agreed to by both parties. Over the course of 2-1/2 years many people and firms in the aircraft industry donated freely of their time, labor, and repair parts to bring the A-4 back to its former glory. The restoration was done to FAA Quality Standards, with each repair inspected for quality assurance by a licensed FAA Inspector, even though the plane was never slated to fly again.

Newly painted in its original “Albino Angels” livery, the A-4 was taken from American Bus Repair’s Paint Shop in Bldg 024, and hoisted above the newly repaired pylon on June 14, 2011. The Gods must not have been pleased, because the crane overturned during the lift, smashing the A-4 against the pylon, the crane’s boom cutting through the tail. Within hours, news of the disaster was on all Bay Area TV Stations, and a video of the event appeared on Youtube.

This time, the A-4 was much more severely damaged than it had been during its flight during the storm of 2008. When asked if it was worth fixing—even whether it could be fixed—the volunteers affirmed that it could, and that it should. The Crane Company said they’d pay for the repairs. The City then said the volunteers had two and a half MONTHS to put it all back together again. The volunteers, again with the help of connections that literally reached to Arizona and Florida, did the job in 89-days. On December 19, 2011—this time with no fanfare, and no advanced notice to any reporters or TV stations—the A-4 was successfully put back up on its pylon. 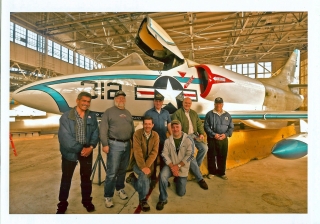 Maintaining a tradition that began in 1969, the A-4 once again welcomes one and all who come through the Main Gate to visit wonderful Alameda Point.