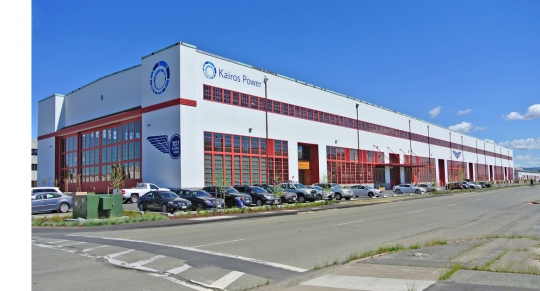 Last year, we were delighted to give an award to Building 91 in the Alameda Naval Air Station –  the first  NAS property sold for private development at Alameda Point.  Now a beautifully restored commercial building, its transformation was a historical moment for Alameda Point –  the start of creating long-term jobs, new residences, amenities, and infrastructure at the former NAS.

This year, we are even more delighted to give an award to its next-door neighbor, Building 9, aka 707 West Tower Avenue.  Originally constructed as an aircraft parts storage building, the building has an industrial character typical of the Shop District in the NAS.  The building is a contributor to the Historic District and this adaptive reuse project successfully retains the building’s historic character while meeting today’s demand for contemporary uses.

The Alameda Naval Air Station is a very special place in Alameda because a large part of the City’s history and development is tied to it.  Over the years, as it grew and expanded, it contributed much to the cultural and social affairs of the town.  The station played an especially important role during World War II and many
aircraft structures and runways were built during this time.  Following the war, the station remained an important naval post.  Construction continued, air facilities expanded, and well into the 1990s, nuclear-powered aircraft carriers were home ported at the Station.  Over the years, the NAS employed thousands of military personnel and local civilians working in all facets of the aviation industry.

Alas, in 1997, the NAS closed and the US Navy has since transferred over 500 acres of property to the City of Alameda.  Since 1996, the City has been planning the redevelopment of the former Naval Air Station, now known as Alameda Point.  In 2006, much of the Station was placed on the National Register of Historic Places and is now one of California’s largest historic districts. 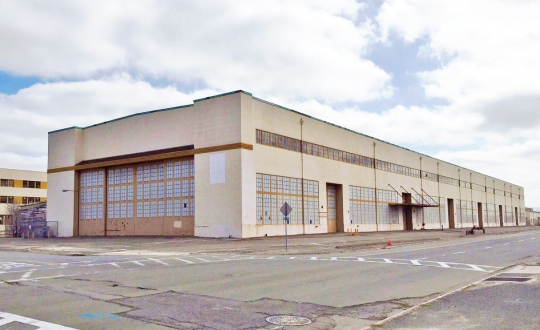 The owners spent approximately $22 million dollars (excluding tenant improvements) refurbishing Building 9. The building encompasses approximately 96,000 square feet. This included restoring the complete shell of the building, a partial second floor, a new concrete slab floor, new utilities as well as landscape amenities including a deck on one end and a patio on the other with many handsome IPE planters in between.  A water retention system was installed for the interior tenants.  Overflow water is contained in a bio-filtration planter.  The project intends to take advantage of the Federal 20 Percent Historic Preservation Investment Tax Credits to assist with the improvements which means strict adherence to preservation guidelines.

According to Alameda’s Preservation Guide for the NAS Historic District, the most important character defining element of this stucco building were its industrial sash, steel windows.  The upper clerestory windows were simply cleaned, repaired and painted but the lower windows had been covered with opaque film.  The restoration work included replacing about 70% of the lower 9,200 panes with Solarban glazing to mitigate solar gain.  The lowest operable sashes within the large units were also restored to operation.

The steel windows and interior wall and ceiling steel framing were water blasted to remove rust and prevent lead paint from damaging the environment.

All the historic door openings are preserved and many of the industrial sliding doors have been restored.  For the tenant’s new storefront, the original doors were slid open, a steel frame was inserted around the opening, and new doors were constructed within the frame.  The building’s restored central steel canopy is original and remains the most dominant feature of the front facade.

In general, the original historic building has been meticulously preserved. The refurbished interiors retain the wonderful industrial character of the building including a 10-ton bridge crane which was restored to full operation.  On the exterior, address graphics comply with the Alameda Historical Advisory Board’s Way Finding Program adopted for the former NAS and the building was painted with colors conforming to the Paint Guidelines for Existing Buildings in the historic Shop District (Nebulous White, Rave Red and Gray).

After all the exterior work was done, the building was separated into two spaces by a large demising wall.  According to Derek Cunha, the project manager for Forge Architecture, designing the demising wall was their biggest challenge:   it is 55’ high x 125’ long.  Once the wall was completed, Building 9 was ready for its first tenant.  The owner delivered approximately $10 million of tenant improvements for Kairos Power, providing a combination of office, labs and advanced manufacturing space for their 150 employees.

Well worth the investment, the project is a wonderful asset to the NAS community and a perfect resource for future rehabilitation projects.