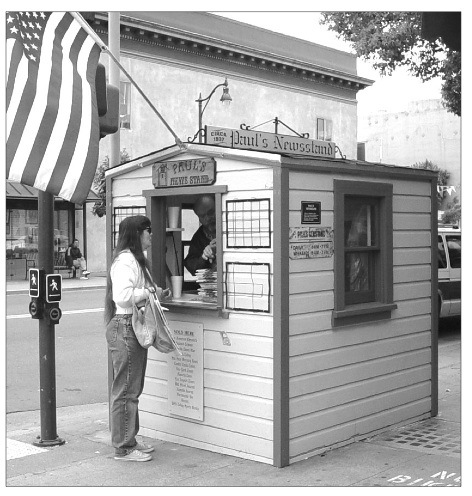 Probably the most diminutive, yet one of the best known of Alameda’s landmarks is Paul’s Newsstand at the northwest corner of Santa Clara Avenue and Park Street. Named for its original news dealer, Paul Manning, the Newsstand barely escaped demolition after years of neglect. But through the efforts of a dedicated band of volunteers and assistance from the City, it has been restored to look like new.

Alamedan Marion Holt tells the story of the Newsstand’s construction. Her father, John J. Mulvany, was Vice President of Bank of America. Mr. Mulvany regularly bought morning papers from Paul Manning on his way to work and felt badly for Mr. Manning, sitting out in the rain selling papers in his wheelchair. So, in 1934 Mr. Mulvany donated the materials and labor to build the structure. Mr. Manning, wheelchair bound due to polio, operated the Newsstand until his death in July 1949.

During World War II, the Newsstand was a major gathering point for Alamedans, eager for news of the War. During this period, the daily operation of the Newsstand remained with the Manning family and continued until the late 1980s. Several individuals have run the Newsstand since then. Currently, The San Francisco Chronicle pays the annual business license fee for the Newsstand, although there is no official owner of the structure.

In recent years, the Newsstand had been allowed to deteriorate, leading to calls for its removal. This came to the attention of former City Councilmember and Vice Mayor Anthony J. “Lil” Arnerich, who declared that he would tie himself to the structure if the Newsstand were to be removed. With Lil as a prime mover, a community wide effort was undertaken to rehabilitate the Newsstand. 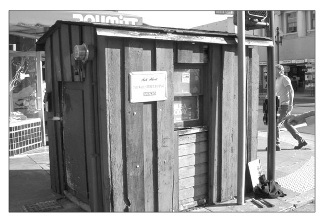 A major part of the cost was paid for by the City of Alameda with Sue G. Russell, the City’s Development Coordinator and Film Liaison, playing a major role in keeping the project on track.

The restoration work occurred in 2006. The rough vertical siding that had been applied in 1969-1970 was removed, revealing the original horizontal lapped siding. The structure was leveled and placed on a pressure-treated platform. It was then re-roofed, painted in historically accurate colors and provided electricity through a newly run code compliant electrical line.

Pete and Carol Halberstadt and a friend performed the initial removal of the vertical siding to see what was left of the original stand. Lil Arnerich was also there. Pete’s firm, West Advertising, also did some preliminary computer design work to show what the structure could look like.

An official well-attended ceremony was held on August 17, 2006 to dedicate the restored Newsstand, complete with music by Jim Franz and The Reverend Roger Bauer, Pledge of Allegiance to the Flag, and remarks by Mayor Beverly Johnson.

Today, the Newsstand continues its role as a defining element of Alameda, helping to maintain Alameda’s closely-knit, small town character. Its restoration is typical Alameda example of how a determined group of civic-minded volunteers can achieve their goal against seemingly long odds.

The Newsstand proudly flies the American flag when open for business.

Note: Portions of this article were taken from the August 17, 2006 dedication ceremony brochure.